After I asked you last week if I should blog this challenge every day or not, I was told that it’s fine to blog only once a week. So I continue with Sunday entries until the end of January. After that I decide new for February.

Like last time there is an german version too. So now have fun with reading!

Tag 18: lern how to press flowers.
For this question, I’ll be in a very nostalgic mood, because I have pressed flowers as a small child. Today the flower pressing is different. Because there are multiple ways to handle flowers.So I have, for example, some glass dimmply filled with flowers and let tehm dry and now its a decorative thing. Also you can dry flowers in the microwave / presses or dip it in wax and preserve it.

The variant with the microwave is much faster than the classic version (to dry it in a thick book). Anddiping into wax allowed a flower to stay in an almost original form and beein conserved. If you edited waxed flowers after drying with a special spraypaint, you can process these – for example, to jewelry.

Personally, I prefer to stick with the classic version of the flowers drying and if I want to tinker me jewelry, I get plastic flowerdeko and processed it further.

Tag 19: Photograph your handwriting
This reminds me of a day in the Goth Challenge, witch i’ve done 2013(should I actually make a remake again this year?). At that time I should write and photograph the my favorite song. For the task I took my calligraphy Set of Hiro Leonardt.

But for now I leave it in my desk, because Lace La Mode has also proposed to write a list of our favorite flowers and / or teas and take pictures from.

But enough talk, here you have the picture, which calls for this task:

Anyone who now can’t read this, may like to stop on my Ask.fm page because I have the answerd the question there too.

Tag 20: look up the performance schedule for your local ballet
It seems to me as if the interest in ballet accompanied by the interest in classical music. At least, it was it in my case. And in Hamburg is ist quiet fast and easy to look after a ballet. After all, you can look at the Hamburg State Opera and John Neumeier is a known quantity. After all, he is the chief choreographer of the Hamburg Ballet Company. Unfortunately, I have until now neither the time or the money to see a ballet live. Also, I don’t know anyone who would voluntarily attend a ballet performance with me – and my Mom will probably be surprised at this statement when she reads this.

Finally, she was wondering that I’ve recently looked a series called Dance Academy. This is actually a series that is intended for young people and is about the 15-year-old Tara Webster, who grew up on an Australian farm and has always dreamed of becoming a dancer. Her dream seems to become reality as she manages to go to  the National Academy of Dance, the best dance school in the country. The series consists of 3 seasons and gives a small (dramatized) insight into the rigorous training of dancers. In the series it is a dream of almost every student to get into the company. But it wouldn’t be a teen series, if the main characters have no additionally typical problems of teenagers, with friendship, love and so on.

I think the series is very nice done, especially because I am one of a few of my generation that don’t had to learn to play the violin or piano and neither I have to go to ballet classes as I was a child. But I always want to. Tag 21: doodle your current dream print.
My first reaction to this object was: question but no sewing enthusiasts about their favorite prints !! And she did it but … well, I’m going to take this opportunity not sketching, but to show you the one I can’t embroider on solid-colored dresses / skirts.

But ar first I have to say, I am a huge fan of Moi-même-Moitié. Especially the blue / black dresses or prints I love very much. Unfortunately I can‘ t say that I’ve own one of these untill today. Because either lacked the money or there was no Moi-même-Moitié dress secondhand offered.

My two dearest Prints are the Ruins Cathedral and Silent Moon (see picture). Now it is surely also understandable that the clothes are also a kind of inspiration for me.

There was, for example, even dresses with gray prints as those are well aware that deal with the topic Lolita. And exactly these clothes, I could’t help thinking, as I discovered this substance here on ebay:

And either I’ll get a few yards over the Internet or I ask my „fabricaunt“ if they can get from their wholesaling. One thing is certain in any case, from a dress / skirt is guaranteed sewn.

Another print, what I also love, is the Nevermore Print, witch I have discovered in October at the store of my „fabricaunt“. Unfortunately, she had it only in cream / black instead of black / white and because I don’t wear dresses in cream colour, I haven’t brought this there. But as you can see, that the Internet can help even further:

If it comes to coarser prints that I really like fpr example the bat print, I found on Amazon, then I sometimes think about it. Because sometimes I think it’s to overloaded whein I would sew a wole dress out of this. But maybe it would be nice if only the ruffles are made out of this. Or what do you think?

Day 22: Share A Favorite Book That Other Lolitas Might Like.
As you might know, I love books and I love to read. That is why I would also recommend more than just one book. So I don’t want to make this post too long, I’ll olnly brief the books that I reccomend to Loitas (and not Lolitas). I think that won’t be so bad,I’ll fully describe the individual books in seperate entries.

The first book, which I recommend to you is Désireé by Annemarie Selinko. This is a historical novel, where is about the girl Désirée Clary. She was the first fiancée Napoleon later married, the French Marshal Bernadotte, who lived in the favor of the emperor in Paris and finally left France with her husband, as he ascended the Swedish throne. Anyone who knows me personally will know why I have this book and Strangely, I did not dare to take me for this reason also long the book. These things I have changed recently, so I’m still reading, ans I find this really good so I now recommend it.

Book number 2 I mainly recommend because of the beautiful illustrations. I have to say that EA Poe’s eerie stories comes in many versions but this is the most beautyfull one. However, the version that I recommend to you is the one to which Benjamin Lacombe – for me one of the greatest artists ever – has contributed its part. His illustrations highlights the wonderfully eerie and melancholy nature of the selected visions of grandmaster Edgar Alan Poe .

That Poe is one of my favorite authors, one can imagine, if one knows that I’m because of the allusion to The Raven so in love with the Nevermore Print above.

Who is to inspire more with manga, I can the 13-part series God Child by Kaori Yuki recommend highly (can be seen on the left the cover of Volume 9).

The story revolves around Count Cain C. Hargreaves and placed in Victorian England, late 19th century. The special feature of Count Cain is his extraordinary hobby to collect poisons and he seems to draw all kinds of gruesome figures on. So he meets a mass murderer, demons and other dubious figures. And quite often hang the eerie incidents along with its own, well-off family, whose pedigree posing numerous puzzles

So, I think those were enough recommendations. Who would like to learn more about the books that can either ask Aunt Google or do me a favor and see more in my blog, because as I said, the books suggested here I will present in any case soon here in more detail!

Day 23: Learn About A Renegade Princess 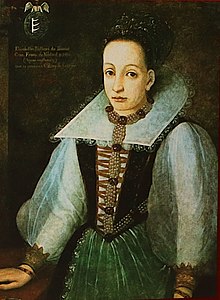 After some thinking I took Elisabeth Báthory. Well, it’s not a princess, but I think at this point it fits very well. And most importantly, it should not surprise those of you who follow my blog for some time.

Born in 1560 Countess received primarily through its serial murders as Blood Countess in the history. They say she should have killed young girls to bathe in their blood. She should has believed that she would be so young and beautiful. How many girls she killed, does not seem to be clear (I read something between 36-650 women). But their actions were punished and she was walled in 1610 in a small room in her castle Čachtice and had to the end of her life only through a small hole in the wall contact to other people.

Now you can imagine that their behavior and attitude provide plenty of material for stories, films, radio dramas and music to this day. They should, for example, have been a source of inspiration for Bram Stoker, he has incorporated in his Dracula novel.

What fascinated me so much about her, should understand their latest, if you read the Blogbattle post about blood. Interestingly, Báthory not have been so wrong with her assumption that blood rejuvenates. Because the year before last, researchers have found that blood can rejuvenate. How that looks you can see here.

Day 24: Wear sometihng with lace
I have already mentioned once that I am more the fan of ruffles instead of lace. That’s why I have not so many clothes with lace. In addition, these are then usually meant for special occasions, such as the dress which I wear in November for the Vampire Ball in Berlin.

This is my only piece of clothing that is even for the most part made of lace: